Almost all face recognition systems have a glaring vulnerability –  silicone masks like this one:

are treated as real faces. Furthermore, people have robbed banks and deceived immigration while wearing latex masks, which are becoming increasingly sophisticated and readily available. I bought this low-end mask: 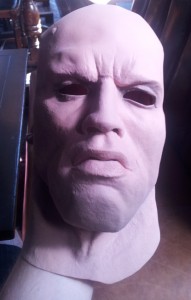 at a London costume shop for about £30. The salesman told me they get contacted by the Metropolitan Police every few weeks about someone who has committed a crime while wearing the mask. The police actually go around to all the shops and search through the sales receipts (remember: pay with cash).

In 2009 I wrote a book with Ted Dunstone, and we included a chapter on biometric vulnerabilities. We predicted that as recognition systems become more common, people will start looking for new ways to get around them. We recommended that vendors stop focusing purely on matching accuracy for authentic presentations, but also develop technology for liveness and spoof detection. Unfortunately, it is a problem that has been largely ignored, as witnessed by the recent iPhone 5s fingerprint scanner attack. Some commercial face recognition systems can be spoofed with a much easier presentation attack – simply hold up a photo or video clip (e.g. on an iPad) of an enrolled person to gain access using their identity.

As far as I know, there are no products available that specifically address this problem. I thought it would be interesting to see if a simple spoof detection system could be developed using inexpensive components and open-source software.

It is difficult to detect masks using only information from the visible spectrum. However, in the far infrared (IR) spectrum real faces have a distinctive heat signature: 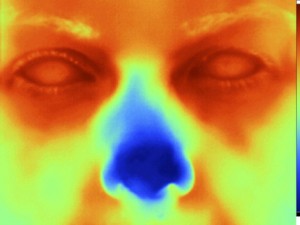 The surface temperature of a mask is closer to the ambient temperature, and the heat distribution is more uniform. It would be a challenge to create a mask that appears human-like in both the visible wavelengths and the far IR.

Unfortunately, high-resolution thermal cameras (like the one used for the image above) are very expensive – anywhere from $5,000 to $50,000. Our idea was to use multispectral imaging: combine a high-resolution visible wavelength camera with a low-resolution IR sensor. The underlying concept is simple. A subject must have something that looks like a face, and the temperature of this face-like object must be consistent with that of live human skin. It’s not hard to think of ways around this, but this relatively simple system can help protect against the easiest and most common spoofs.

I spent some time trying to get the Raspberry Pi and MLX90620 to talk to each other directly. I made a little progress, but ultimately I gave up as there seems to be an incompatibility between the RPi’s I2C library and some Melexis components (see this post for details). Connecting it to an Arduino was straightforward. Most of the info here applies to the MLX90620 and there are a few helpful threads on the official Arduino forum.

Here is the RoBoard’s IR component wired up to an Arduino Nano: 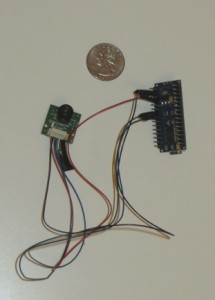 As you can see, both components are very small. Details about wiring can be found in the links above.

I used an Arduino sketch from SparkFun’s github repo to interface with the sensor using the I2C protocol. I made minor modifications to support serial communications, control an LED, and store the temperature values as bytes:

3. Connecting the Raspberry Pi and Ardunio

The next step is to establish communications between Raspberry Pi and Arduino. The Raspberry Pi needs to be able to issue two types of commands:

There are three standard ways to setup the communications: over a serial USB cable, the serial pins on the GPIO, and using I2C (all three methods are discussed on this site). We’ll use the USB since it is reliable, trivial to setup, and can also be used to power the Arduino (although, make sure to use a powered USB hub). 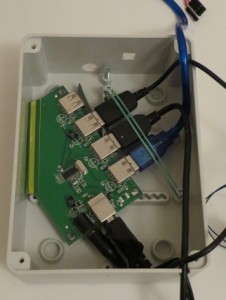 In the image above, you can see the holes for the camera and IR sensor. Here it is with everything packed in: 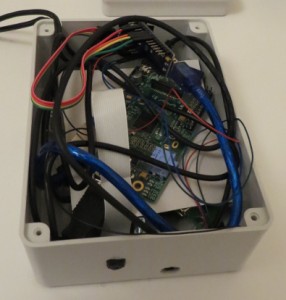 As you can see, there is quite a bit of empty space. However, the thick USB cables take up quite a bit of room, so I wasn’t able to use a smaller box. A properly designed enclosure would be much more compact.

A recommended, but optional, step is to overclock the Raspberry Pi using sudo raspi-config options. This will make everything run a little more quickly.

Next, we’ll make sure everything is up to date on the Raspberry Pi, and install a few libraries: PIL, numpy, scipy, OpenCV, pySerial, and various others. Execute the following in a shell:

After these have finished (it may take a while), we install the latest scikit-image from the github repo:

Run the following Python script to make sure everything has installed correctly, and the communications between the RPI and Arduino are working:

If everything is working, it will cycle through all the LED colors and print out the most recent temperature readings.

2. Capturing an image with the camera board

I used the official Rasberry Pi camera board for this project. The camera takes very high quality images. However, at the time of writing, the RPi foundation has not yet released an official Video4Linux driver for the camera, making it a little more difficult to use with Python. There are a few workarounds. Run the following Python script to capture an image, convert it to grayscale, and equalize the histogram:

3. Aligning the IR sensor output with the optical image

Let’s take stock of what we have at this point:

The picture below shows my testing setup. As you can see, see the camera and sensor are close to each other, and pointing in the same direction:

What we need to do now is align the temperature values with the corresponding locations in the optical image. In other words, we need to apply a rotation, scale and translation to the 16×4 temperature array. At first I tried to tune the transformation parameters by hand, but this was inaccurate and cumbersome. Here is a high-level outline of the technique I used to automate the alignment stage:

Here is an example of the (smoothed) temperature readings aligned with the optical image: 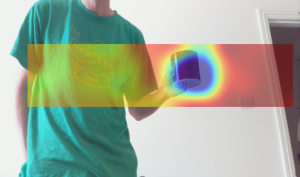 As you can see, since the mug is hot there is a clear peak in the IR spectrum. Note that there is a slight misalignment because the mug was in motion (towards me), and there is a lag in the temperature readings.

I found that the MLX90620 gives accurate/consistent temperature readings. My biggest complaint is that the aspect ratio (4:1) is inconvenient for this application. If it is oriented vertically, the unit will support a range of user heights, but the unit needs to be pointed directly at the subject. On the other hand, if it is oriented horizontally (as in the image above), there is more freedom for the subject to move side-to-side, and more than one person can be tracked at a time. However, there may be a problem if a subject is particularly short or tall. I ended up using the vertical orientation.

I would interested to test the Panasonic Grid-EYE, which also has 64 pixels, but they arranged in a square (8×8). I’m sure it won’t be long before some inexpensive higher resolutions IR components hit the market.

We now have all the pieces in place to do liveness detection. The process is as follows:

Here is the code:

The final step is optional. For the device described so far, the only means of output is an LED indicator on the rear. However, in many situations it would be more convenient to monitor the results remotely through the web. web2py is an open source Python web framework that is perfect for this application. It is bundled with everything you need to quickly get an application up and running, including a web server, an administrative interface and an IDE (which is very convenient when doing headless RPi development).

To install web2py on a Raspberry Pi, execute the following from a terminal:

Note that in order to use the admin interface remotely, you will need to generate a self-signed SSL certificate. After you’ve done that, execute the following to start web2py:

Enter an admin password, visit https://[ip address of your RPi]:8000/, and you are ready to go. web2py can create a template application for you with a database backend, user authentication, etc. For our application, we created a controller than returns the most recent results as JSON:

On the client side, JavaScript polls for the latest results, and updates the display with the most recent capture image, face temperature, etc.

The following video demonstrates a few presentation attacks, as seen from the camera’s perspective. The first attack uses a printed cardboard mask (available online for a few dollars), and the second uses a video clip playing on a tablet. This demo was created using a webcam and PC, instead of the Raspberry Pi method outlined above. The results are the same but with a higher frame rate. red box=fake face, and green box=real face:

The following video shows the Raspberry Pi-based detector. It’s a little hard to see, but watch for the LED on the rear of the unit. Red LED=fake detected, and green LED=no fake detected:

This system is not foolproof. It’s not hard to think of ways to defeat it, but it’s also not hard to think of ways to improve it (e.g. detect a pulse using Eulerian Video Magnification). The main point is that if we are going to rely on biometric identification systems (e.g. for border control), we need to be aware of their limitations and look at ways to make them more secure.

There are many other potential uses for this box. Essentially, it is a combination of: (low cost hardware) + (open source software) + (computer vision) + (remote temperature sensing). Here are a few ideas: